What are electrons and orbitals?

Posted on February 2, 2016 by misterguch

If you’ve been studying the atom (and I imagine you have, given the fact that you’re reading this section, you know that electrons are weird.  Every teacher you’ve had since you were 4 years old has told you that atoms have protons and neutrons in the nucleus and electrons in orbitals outside the nucleus.  Unfortunately, you’ve just recently learned that these orbitals aren’t actual orbits, but these weird 3-D shapes.  You’ve probably also heard some random things about these orbitals that sound just plain wrong.

In this tutorial, we’ll make some sense of what it all means.  And no, I’m not going to go into a lot of math (though I may link to some of it for the curious).  My goal is that you just figure out what it means.

Let’s say that I want to move energy from one place to another.  To make this happen, there are two ways in which this energy can move around: 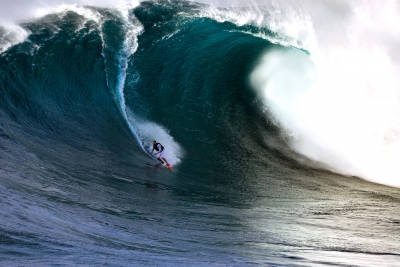 This man is dead now.

Once upon a time, there was a guy named Werner Heisenberg (if you Google him, you’ll find pictures of the guy from Breaking Bad – they weren’t the same guy).  Anyway, when Heisenberg was measuring the energies of various things, he found that it’s impossible to simultaneously know both the energy and the location (or to be more precise, momentum) of something.  This is called the Heisenberg uncertainty principle (more info).

You must admit, this is one handsome physicist.

The good news for us (and the thing that keeps our lives from becoming puzzling and strange) is that the uncertainty principle says that the limit to which you’re allowed to know things simultaneously is pretty small.  As a result, if you mostly know the energy of something, it’s possible to mostly know where that thing is.  This effect, incidentally, becomes less and less important as things get bigger, which means that you’d need an unimaginably precise measurement of the energy of a baseball to lose its location.  That’s probably a relief.

OK… you’re probably asking yourself what that means, and I don’t blame you.  If you think about it for a second, this idea says that things behave both as particles and waves at the same time.  You see, it’s pretty easy to measure the location of a particle and it’s pretty easy to measure the energy of a wave.  What Heisenberg’s uncertainty principle tells us is that small things are a little bit particle-like (to the extent that you can know where they are) and a little bit wave-like (to the extent that you can know their energies). In other words, everything is both wave-like and particle-like at the same time, and the Heisenberg uncertainty principle tells us how much of each we can have.

So, how particle-like and wave-like is something?  It depends on the situation.  Let’s find out more…

Particles are like baseballs, where you fling the particle and it moves in a straight line and then it hits something.  The baseball is a single thing that you move from one place to another, like shooting a bullet from a gun. 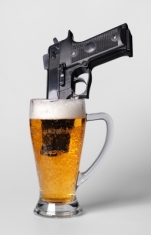 I just thought this picture was funny.

Waves are like ocean waves, which you probably already know about.  You don’t know where a wave is, exactly (if you don’t believe me, tell me the exact location of an ocean wave).  Energy travels in the wave – not in a single location, but as the overall wave.

These examples aren’t very good ones when you get down to an atomic level, so let’s use better examples from the microscopic world: 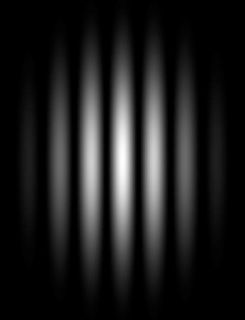 Spoiler alert: The experiment looks kind of like this.

We haven’t yet said what this has to do with electrons, so let’s finally get to the whole point of this tutorial:

Electrons are waves in orbitals

In an atom, electrons are not particles.  You may have heard your teacher say that orbitals are where electrons are located (this is true) and that the shape of the orbital indicates the various locations to which the electron jumps over time (this is not true).  The truth is weirder:  The electron isn’t a thing that jumps around in the orbital – it’s a wave that takes up all of the space in an orbital at once.

To imagine this, go get into the bathtub.  Move your arms up and down to make waves, and vary how often you make these waves.  At some point, you’ll see that the waves appear to be stable 2-D waves in which some points don’t move at all, which is pretty cool. 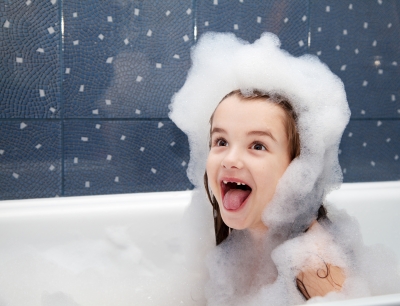 In the same way, you can have 3-D waves.  They’re a little harder to imagine, but the idea is the same in 3-D as your bathtub waves are in 2-D.  In other words, it’s possible to have a stable 3-dimensional wave, and this is what electrons look like in an atom.

The electron is not somewhere within the blue area. It is a wave that takes up the entire blue area.

Again, the electron is not a particle that jumps around an atom.  It is a 3-D wave that has the same extent as the orbital in which it is located. Or, put another way, the electron isn’t a point at all.  So quit saying that.

What have we learned?

This dedicated teacher is committed to teaching about electrons and orbitals.