Fission, fusion, and blowing stuff up

We’ve taken quite a ride through the world of nuclear chemistry, so it’s about time that we get to the coolest stuff:  The stuff that glows in the dark.  Though I’ve mentioned things like carbon-14 dating, the fact remains that most of you think of nuclear power plants as Homer Simpson’s workplace and of everything else nuclear consisting of flat plains where cities used to be. 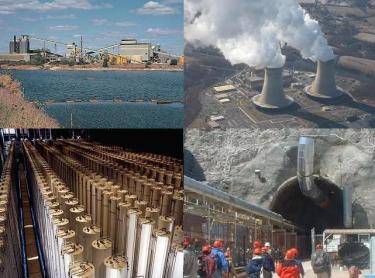 Though they spent a lot of money on this promotional brochure, the plant’s “Gone Fission” gift shop failed to report an increase in sales.

Well, nuclear reactions actually involve stuff like this, so let’s get started talking about it.

If you remember those two things, then you pretty much have the main idea.  However, if your teacher decides do ask follow-up questions, it might be nice to know a little more.  Which is what we’ll do below.

To recap, fission is when large atoms decide to break apart to make smaller ones.  This occurs because the daughter atoms formed in this process are lower in energy than the original atom, and when stuff becomes more stable it’s likely to happen.  Where does all this energy go?  It’s released as heat! 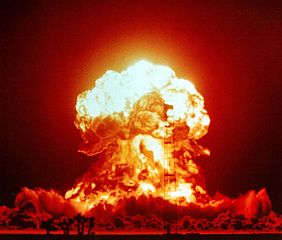 This nuclear detonation in the Nevada desert was a part of Operation Upshot-Knothole, and I am including it because the name “Upshot-Knothole” made me giggle. 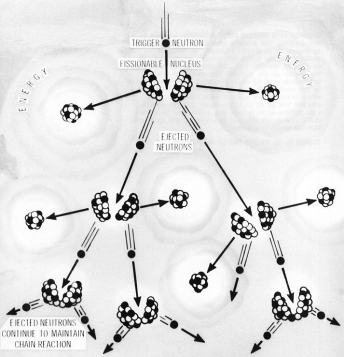 Let’s break this down into easy-to-understand steps:

So, where does the energy come from?  It turns out that nuclei don’t weigh as much as the particles that comprise them.  For example, if you were to add the mass of two protons and two neutrons, the mass would be greater than that of helium-4, which contains the same stuff.  This difference in energy is called the mass defect, and this energy is the binding energy that holds the nucleus together. The release of this energy is where the heat given off by a nuclear process comes from.

The overall fissioni process is called a “chain reaction” because the first event causes a chain of similar events that occurs until you either run out of nuclear stuff or run out of neutrons.  Since the latter isn’t very likely (nuclei also spontaneously undergo fission, creating more neutrons), you’d better make sure when you start this that you either have a good way to stop it or really want a lot of energy given off.

Fission reactions are used on a large-scale in nuclear reactors.  Though there’s a lot of stuff that goes on in these reactors, the basic power generation happens in exactly the same way as in a coal power plant.  Essentially, heat is given off by some process, which is used to boil water.  This water vapor is used to turn big paddlewheels (turbines), and when these things turn they generate electricity.  The steam is then cooled down and pumped back into where the heat is to be boiled again.

Where nuclear reactors differ from coal power plants is that it’s nuclear fission and not regular ol’ combustion that generates the heat.  As you might imagine, we would be very unhappy if nuclear power plants blew up all over the place, so they operate in such a way that the critical mass needed to make the reaction undergo an unregulated chain reaction never happens.

Here’s what does happen:  In a nuclear reactor core, there are a bunch of rods made of radioactive stuff that are dipped into a big tank of water.  By themselves, these rods will trade neutrons back and forth until a chain reaction occurs, but in-between these nuclear rods are control rods that absorb the neutrons given off by fission processes.  If the control rods are allowed to absorb a lot of neutrons, there will be fewer fission events and the reactor will give out less heat and power.  If the control rods only absorb a few neutrons, there are more fission events and the reactor will give out more heat and power.  A nuclear core assembly is shown here: 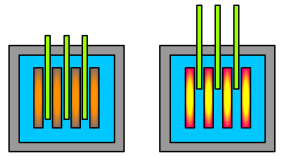 As the caption indicates, if the control rods are there to suck up the neutrons and slow down the reaction, lowering them between the rods will result in a slower process while raising them will result in more power generation.

If the fuel rods in the core of a nuclear reactor get hot enough, they will eventually melt, dropping radioactive goo all over the bottom of the containment chamber.  This “meltdown” process may result from a loss of coolant, unexpected changes in fission rates, or fires caused by other problems.  Reactors are generally designed with redundant safety systems to prevent this, though there may be cases where not-too-bright people build plants in locations where these won’t be enough (I’m looking at you, Fukushima!)

Fusion:  Let’s get together!

Nuclear fusion occurs when small nuclei join together to form larger ones.  This is the process that generates the energy that keeps stars burning, as well as the reason that hydrogen bombs are way more destructive than atomic bombs.  Not that you’d want either of them dropped on you, or anything.

Basically, here’s the idea:  If you have enough energy and cram two small nuclei together (deuterium and tritium, for example), you can make the nuclei stick to each other and form a bigger one.  When this happens, the resulting atom is more stable, resulting in a huge release of energy. Because this release of energy is way bigger than the release of energy from a fission reaction, this makes things very, very hot.

How do we make fusion happen?

Let’s get this over with:  How to make nuclear weapons

For the record, what I’m going to tell you isn’t enough, by itself, to make a nuclear weapon.  To actually make nuclear weapons you’ll need the unofficial support of one of the nations that has experience building nuclear weapons. 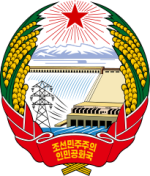 Ask for “Kim”, and tell him that Ian sent you.

Now that you’ve collected these things, here’s how to make a nuclear weapon.  We’ll start slow with a fission device, because you’re new to this.

This is harder than you may think, because you can’t just buy this stuff from the store.  Or if you can, you live in a really weird neighborhood.  In any case, you’ll need your North Korean friends to lend a hand. 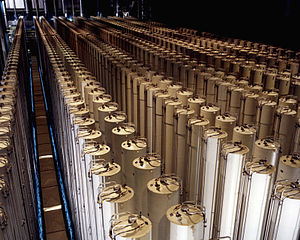 I forgot to mention… you might need to rent a storage space for all the gas centrifuges you’ll need.

Step 2:  Put the fissile material together in a cool shape that reflects your personality.

I recommend using a sphere for simplicity’s sake, though if you have a couple of half-spheres, that’s OK, too.

Step 3:  Squish the fissile material together into a tiny space.

Here’s the idea:  If you have a normal piece of uranium-235 lying around, it’s probably just going to sit there.  However, if you can squish it into a small enough space, you can get all of the atoms close enough together that nearly every loose neutron causes another atom to split. Put another way, you take a subcritical mass of fissile material (i.e. some quantity that won’t undergo an uncontrolled chain reaction) and squish it together into a critical mass that will undergo an uncontrolled chain reaction.

The two methods used by the cool kids to make an atomic bomb are a gun assembly and an implosion assembly. 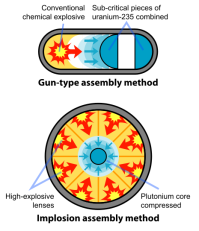 Public domain images: Your starting point for crimes against humanity.

Step 4:  Give yourself a pat on the back!

Once you’ve put together a nice set of atomic bombs for the Presidential Palace, you’ll get the itch to start building thermonuclear fusion devices.  Though I don’t have time to write much about that, you might want to Google the Teller-Ulam device to get the party started!