Equilibria – our little busy friend in the beaker

I fell down one time when I was walking on the street.  When this happened, I said that I had lost my sense of equilibrium and fallen down.  People were very sympathetic, though I could tell they were laughing on the inside because they all knew that I just wasn’t paying attention and tripped on a crack in the sidewalk.  Not that any of this is relevant to equilibria.  I’m just sayin.

Artist’s conception of me falling over.

Anyway, when your chemistry teacher talks about equilibria, he or she means something different than not tripping on the sidewalk.  Instead, what they mean is that some process is in balance, and is stable – in perfect harmony, if you will.

I’m pretty sure she didn’t go to my school.

The problem is that once they get to the other side of the room, they find that she smells as if she never heard of deodorant and wrestles with unwashed dogs in her spare time.  This drives 10% of the boys away every minute.  As a result, the number of boys around her constantly changes. Here’s how:

Before the boys start walking at all, there are 100 boys on the left side of the gym and 0 boys on the right side.

Wait a sec… what’s happening here?  How can you possibly balance out the number of boys on each side if the proportions that move are so different?

Let’s go back to the two minute mark:

Since 9 boys are walking in both directions, the population of both sides remains the same.  This works because 90% of a small number is equal to 10% of a very large number.

Though this example is weird, it does a pretty good job of clarifying the nature of chemical equilibra.  For instance:

Equilibria have to be reversible.¹  In our example, boys were free to move back and forth across the gym.  However, if the girl cut off their legs, the number of boys on the right would just keep growing and the number on the left would keep shrinking.

An equilibrium process is dynamic.  No matter how long we let everybody hang around in the gym, some of the boys will move toward the girl and some will move away.  In this equilibrium process, something is always happening.  However, this doesn’t always mean that an equilibrium always looks dynamic.  For example, if the school principal were to ask what the heck was going on in the gymnasium, a teacher visiting two minutes after everybody showed up would tell the principal that 90 boys were talking to the girl and 10 weren’t.  If another teacher showed up one minute later, they’d say the same thing.  The principal might conclude that everybody was staying in one place because he can’t see everything that happens – in reality, people are moving back and forth all the time.²

Le Châtelier’s principle:  When changes are introduced to chemical equilibria, the equilibrium will shift to minimize the effect of this change.  This idea can be used to our advantage when doing reactions, as we’ll see later.  For now, let’s imagine that the girl pulled out a dead squirrel at the four minute mark and started playing with it.³

Or, even worse, used it for an afternoon snack.

As a result, perhaps only 80% of the boys on the left side of the gym will go say hi, while 40% of the boys who are already there will be creeped out and leave.  As a result, the equilibrium will look like this from four minutes onward:

On the one hand, she eats squirrels. On the other hand, boobs. OK, let’s do this!

So, let’s look at some equilibria you might have bumped into over the years: 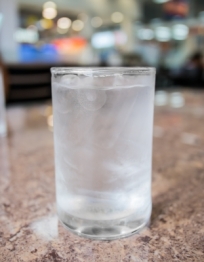 Behold! The magic of chemistry!

Enough of that.  We’ll talk more about equilibria in the next tutorial.