I love balancing redox equations!  They’re about the most fun thing I can imagine, aside from having a tooth pulled and having my dog get emergency surgery because some idiot drove through my neighborhood at top speed and somehow managed to smack into him while he as on a leash.

I’m sure you have the same love for redox equations, but fortunately for both of us I have a solution to our woes:

For those of you who don’t know much about redox reactions, let’s review some terms that we’ll be using:

Now that we’ve gone through all of that, let’s get rolling!

An example that will show you what to do:

As the header above suggests, here’s an example to show you the method you should use to balance redox reactions in a basic solution:

Follow these easy steps, and you’ll be a pro:

Step 1:  Determine which elements have changed their oxidation states

Step 2:  Make some lines on the equation that link the elements that have been oxidized and reduced.

Step 4:  Figure out the amount of charge on both sides of the equation.

In this equation, we have two charged compounds on the reagent side:

On the product side, there’s nothing with any charge.  As a result, it’s a nice round 0.

Step 5:  Add hydronium ions (H+) on one side of the reaction so that both sides have the same overall charge.

Given that there is a -10 charge on the reagent side and no charge at all on the product side, let’s put ten hydronium ions on the left side of the equation to cancel out the negative charge.  It’s OK to do this, because if we’re in an acidic solution there are H+ ions all over the place.

Step 6:  Add water to balance out the elements.

Basically, just check to make sure that you have the same number of atoms of each element on the left and right, and that the total charges of everything on the left is the same as that on the right.  In this case, we’re in good shape, so that’s our answer!  Let’s go have a Fanta to celebrate! 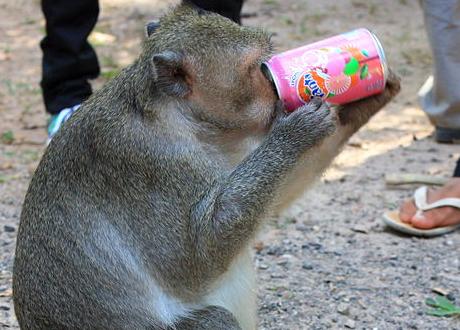