So, let’s learn about them!

Before we talk about Lewis structures, we really should talk about the various types of representing chemical compounds.  After all, if we can’t tell people the important things about a compound, there’s not really any way that they’ll be able to figure out what the heck we’re talking about.

There are three big classes of chemical formula: 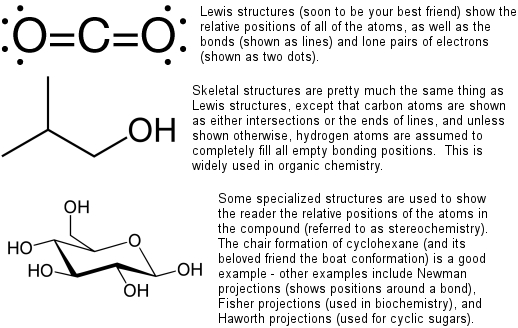 Now that I’ve gotten all of that out of the way, it’s time to talk about how to draw Lewis structures.  As mentioned earlier, Lewis structures are incredibly important in this class, and way, way more important for actual chemists.  If you ever wonder whether something is just being taught to keep you busy, I can assure you that this is not the case here.

Step 1:  Find the number of valence electrons in the molecule

For those of you who forgot what that means, that’s just the number of outer electrons that the molecule contains in the s- and p-orbitals.  If you still don’t know what that means, use the handy chart below:

Step 2:  Find the number of octet electrons in the molecule

Let’s figure it out:

Adding them up, the atoms in the molecule want a total of 16 octet electrons.

Step 3:  Find out how many electrons the atoms need (bonding electrons)

Basically, subtract the valence electrons from the octet electrons.  Or if you can’t remember the name of each type of electron, just subtract the little one from the big one. Either way, in our example:

These are the electrons that will be making chemical bonds in this compound.

Step 4:  Figure out how many bonds will be formed

It’s finally time for you to draw the molecule at hand.  However, I’m guessing that you have no particular idea how to do this, and that you’re wishing you’d taken earth science instead of chemistry right about now.  In order to help you out, here’s a handy hint:

Write the letter of the least abundant element on your paper

In this case, there’s one carbon and four hydrogen atoms, so draw a big C.  If you guessed the wrong element and put an H instead, it really doesn’t make any difference.  I just figured that putting a letter on the paper would make you feel like you’re making progress. Which you are.

To figure out what bonds go where, here are some more handy rules:

OK… let’s go back and have a look at the C on your paper:

That’s a C, all right

Let’s start drawing some other letters around it.  Why not put one on each side? 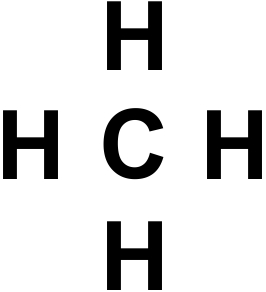 Now, ask yourself an important question:  Do these atoms just hang around in space for no particular reason?  Of course not.  They need bonds.  So let’s just draw bonds between the carbon and each hydrogen.  It’s not like you’ve got anything better to do:

Let’s check out if what we have is OK so far:

The last step in drawing this Lewis structure is to figure out if we need to add any lone pairs to any of the atoms present.  In case you’ve forgotten (or I forgot to tell you), a lone pair of electrons consists of two electrons that are connected solely to one of the atoms in a molecule.  They are drawn as two dots, which isn’t really surprising.

To do this, what we first have to do is to figure out how many electrons each of the atoms in the structure we drew has around it.  This is different than the number of valence electrons, because both of the electrons in each covalent bond count toward filling an atom’s octet electrons.  Heck, instead of talking about it, let’s just have a look: 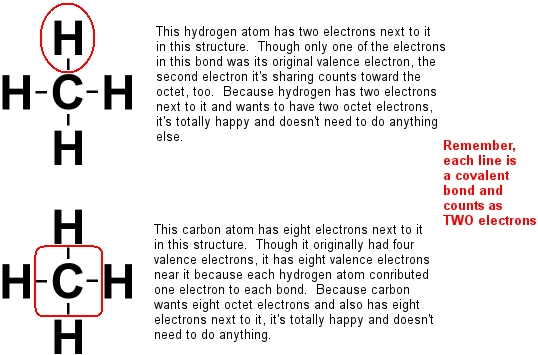 Rather than do a lot of blathering on, let’s just go through the steps:

There are fewer nitrogen atoms than other atoms, so just write an “N” on your paper somewhere.  When you’re done with that, draw three “H” atoms around it and connect them to the N with bonds.  You should have something that looks like this:

Given that hydrogen wants one bond each and that nitrogen wants three bonds, we’re doing OK so far.

Let’s take a look at each atom in this molecule and see if any of them need lone pairs:

Yet another example:  carbon dioxide, CO₂

I’m not going to do the math for you, but will show the answers to each step so you can follow along:

Piece of cake!  Except… uh… we have a problem.

It doesn’t really matter which of these you try first, because you’ll find that sometimes one will work and sometimes the other will.  However, I’ve noticed that some students, when given a problem like this, will decide that they should just give up and/or freak out.  After all, if you don’t know what to do, why should you do it anyway?

Here’s why:  Because that’s how the world works.  If you think that this is the first and only time you’ll ever run into something you don’t intuitively know the answer to, you’re a knucklehead.  Instead of feeling like you’re lost, try something to see if it works. Try anything to see if it works.  The worst thing that can happen is that you’ll find out you tried the wrong thing and you’ll try something else.  If this upsets you, buy an eraser and quit whining!

That said, I’m going to suggest that you put a couple more bonds in the structure you have. This suggestion is based on the fact that I know the answer to the problem, but it’s also based on the fact that if you rearrange everything, carbon won’t be in the middle anymore and since there’s only one of them, that doesn’t seem likely.  Anyway, let’s double up the bonds and see what happens:

Well, it appears that everything worked out OK.  We used up the four bonds we figured out we’d need, each oxygen is bonded twice, and carbon has bonded four times.  So far, so good.

Let’s see who (if anybody) needs lone pairs:

And there’s our answer:  Double bonds, lone pairs, and all.

Don’t worry:  I’ll give you some more examples after I finish this last section:

Some words of caution:

During the process of learning how to write Lewis structures, some of you will run into odd problems that you can’t figure out.  Let’s take a look at how to handle them:

No matter, what, don’t panic.  If you practice, practice practice, you can’t help but get it right!

Draw the Lewis structures of the following covalent compounds.  Solutions will be given below:

Answers to the practice problems:

If you did this right, you should have calculated that there are a total of four bonds. Drawing this out and adding three sets of lone pairs for each chlorine atom, you should get a structure of: 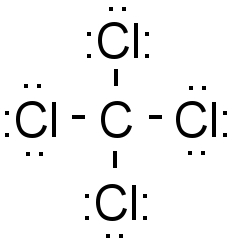 With three bonds and only two atoms, there has to be a nitrogen-nitrogen triple bond. This gives each nitrogen six electrons, so the extra two come from a lone pair on each:

With three bonds, we find that boron bonds once to each fluorine atom – no surprises there.  However, boron only needs six octet electrons and not eight, so it doesn’t need any lone pair.  (Note:  If you drew this molecule with the fluorines at right angles, that’s just fine – the reason I did it this way is because of the magic of VSEPR, which is in a different tutorial). 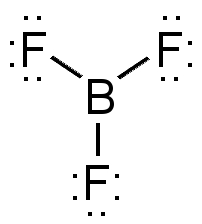 There are four bonds and only three atoms stuck to carbon.  How do we handle this?  Well, the only way we can handle it is to bond oxygen twice to carbon, as there’s no other possible way of handling this.  Wrapping up, oxygen needs two lone pairs of electrons to finish the molecule:

There are more tutorials coming up for polyatomic ions, resonance structures, and expanded octet compounds, so if it’s not up yet, come back in a few days.

This webpage is licensed under the Creative Commons Attribution-NonCommerical-ShareAlike 4.0 International license (CC BY-NC 4.0).  For more information about this license and how it affects how you can use the contents of this site, click here.  Any links in the body of the text or elsewhere on this page are not covered under this license, and the copyright holder should be contacted directly for their terms of use.

For those of you who have been told to cite things incorrectly, the date this was published was January 20, 2015.  If you’d like to do it the right way, Google “ACS Style” or the style rules for any of the other physical sciences.  Seriously, MLA style?  That’s only used in the humanities, and we’re scientists!