Chemists spend a lot of time with chemicals they’re trying to identify.  Some chemists try to figure out what’s in that bottle that Uncle Merle had in the “lab” out in the back shed, while others try to figure out whether EvilCorp was dumping toxic waste directly into the mouths of endangered squirrels.  Whichever is the case with you, it’s handy to have some method around to identify those pesky unidentified chemicals that are lying around.

Let’s have a look at some of the more common ways that people use to figure out what the heck it is they have sitting in their lab.

If you’re pretty sure what’s sitting in a container and just need to rule out other stuff, you can occasionally use very simple tests to figure out what you’ve got.  These include: 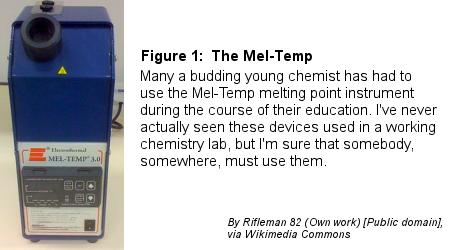 Chromatography is used by basically everybody when doing experiments.  Of course, that’s actually not a very clear statement, given that there are about a billion different types of chromatography, but technically true.

Chromatography is used with simple mixtures of compounds to determine what’s in there. Because it’s usually the case that you have some idea what these compounds are, you can figure out the identities of these compounds using this method.  Which is vague, so I’ll just explain it:

The basic idea behind chromatography is this:

A disclaimer: Chromatography has absolutely no ability to definitively identify anything. It gives no information about chemical structure or anything else. However, if you have a pretty clear idea of what’s in the mixture, or if you’re monitoring the progress of a reaction, you can usually infer the information you want. 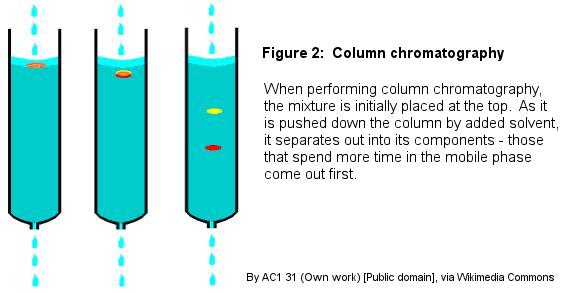 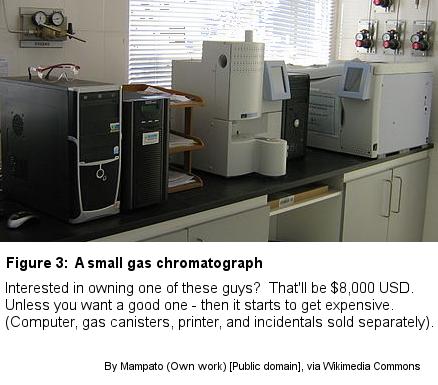 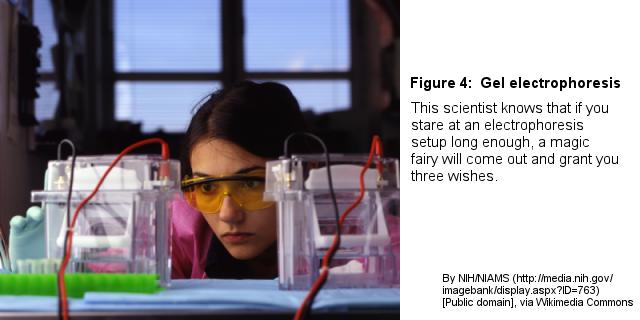 If you’ve got some money to burn, you now have access to some more awesome tools for identifying stuff.  Which is to say, you can now buy yourself a spectrometer and do some spectroscopy.

If you think back to when I talked about the Bohr model of the atom, you’ll remember that I mentioned how all of this worked already.  Of course, since you don’t feel like looking it up, I’ll just tell you again.

In a very simple example, this is something you can do in a simple lab using the “flame test”.  When samples are heated over a Bunsen burner, they turn different colors, reflecting their spectra.  While of limited use in the real world due to the huge number of elements out there, it gives you an idea of how this works.

There are a lot of different types of emission spectroscopy, and they’re generally described by the wavelength of light that they measure.  Here are some of the most awesomest: 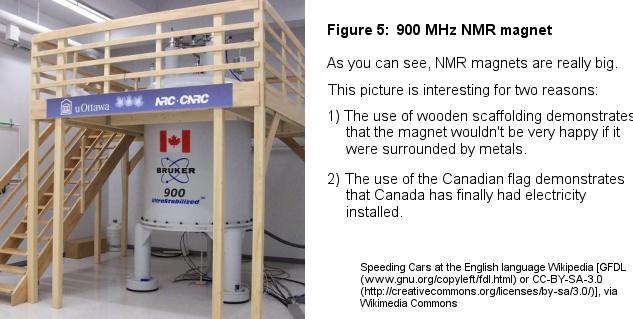 If you’re in the mood for some absorption spectroscopy, you’re looking for a spectroscopic method in which you shine light through a sample and measure which wavelengths of light it absorbs.  Basically, it’s the same process as above, except that it’s way cheaper in just about every way.  The most common example of this you’ll see in an introductory chemistry class is the Spectronic-20 by Bausch & Lomb (which is always called a “Spec-20” in practice.⁸

Other common methods for identifying stuff:

There are lots and lots of other methods that you can use to figure out what something is, and since most of them aren’t all that commonly discussed in first-year chemistry, I’ll just very briefly touch on them:

Often used in conjunction with gas chromatography (GC-MS), this method separates molecules and fragments of molecules by mass.  Mass spectrometry involves ionizing a sample to give its molecules/atoms/molecular fragments positive charge.  These particles are then accelerated toward a great big magnet, which bends the stream of particles toward a detector.  Because big particles take longer to turn than small ones, this process separates each particle by mass.⁹

If you’ve got a solid sample and want to know its structure, it’s possible to shoot X-rays at it to figure it out.  Basically, the X-rays will diffract into various patterns depending on the structure of the sample, and with the use of high-powered computers you can figure out exactly what it is you’re looking at.

A few things about XRD:

And now for a really-quick rundown of other methods:

Simple chemical tests can be used to identify the presence of various elements or classes of molecules (Tollen’s test).

Gravimetric analysis:  You use the change in mass during an experiment to figure out what you’ve got.  For example, by heating a hydrate you can figure how much water was present.

Titration:  This process typically uses the neutralization of one compound with another to determine the concentration of the unknown.  While acid-base titrations are the ones most-commonly seen, there are other types, too.

Electron spin resonance (ESR):  Also referred to as electron paramagnetic resonance (EPR), this method uses the spins of unpaired electrons in molecules to determine structure.  The method for this is similar to NMR, but I figured I’d put it in a separate section because it’s sufficiently odd that you probably won’t see it much.  Most molecules don’t have unpaired electrons, which makes ESR a little less useful than other methods.

This webpage is licensed under the Creative Commons Attribution-NonCommerical-ShareAlike 4.0 International license (CC BY-NC 4.0) – find out more information about reusing this work by clicking here.  For information about using information that I have linked to, please contact the owner of that page for copyright/reuse info.

For more information about this license and how it affects how you can use the contents of this site, click here.  For those of you who need to cite this using incorrect methods such as MLA, APA, and Turabian, it was written by Ian Guch on October 28, 2014.  If you’d like to cite this page correctly using ACS style, click here.

1.  When I was learning how to be a chemist, smelling the solvents was extremely common. Unfortunately, it didn’t occur to us that it might not be a great idea to smell toxic chemicals (and nearly all common solvents are, to some degree, toxic).  I’m pretty sure I could identify methylene cloride at a hundred paces, despite possible central nervous system damage.

2.  It’s funny what you find in high school chemistry labs.  It seems that many of the people who come up with the educational standards that teachers are supposed to use have no knowledge of post-1950s chemistry, which explains why you have to learn about empirical formulas and combustion analysis.

3.  Actually, it can be a sheet (as in thin layer chromatography) or a tub of gel (as in gel chromatography) or probably about a million other things I could mention.  I’m using a tube to make my point, though, so go back and read the important stuff.

4.  Again, this describes mainly processes such as gas chromatography or high performance liquid chromatography.  The method is different for TLC and column chromatography (as well as others I don’t feel like typing out), but the idea is the same.

5.  The tendency of a chemical to do this is called its “retardation factor.” (Retarded, in this case, is used literally in the sense of “held back.”)  In chromatographic methods where the process is stopped before everything comes out the end (TLC, gel), this term is usually referred to as the “retention factor”.

6.  These magnets all utilize superconductivity to get extremely powerful magnetic fields.  As a result, you can permanently stick staplers to the magnets, causing the very upset NMR technician to brain you with a chair (a stapler will screw up the spectrum).  Additionally, electronics such as pacemakers will do very badly in this sort of magnetic field, so if you’re in a hospital, take those warnings seriously.

7.  Other isotopes can also be used, provided that they have a spin of 1/2.  The most common of these is carbon-13.  Because these other isotopes are less abundant than hydrogen-1, it takes longer to obtain NMR spectra for them.

8.  The Spec-20 was discontinued in 2011 after having been sold for 58 years.  However, it’s pretty safe to say that, given the expense of buying new equipment as well as the effectiveness and durability of the Spec-20, you’ll be seeing them around for a long time.

9.  To understand why big particles don’t turn as quickly as small ones, imagine a race in which a skinny guy and a fat guy have to make a 90 degree turn.  Though both may be running the same speed, the fat guy will take longer to make the turn because it has more energy than the skinny one (energy is proportional to mass, if velocity is the same).

10.  This figure simplifies a few things for clarity.  For example, the mass isn’t measured directly, but rather the m/z ratio, which is the mass of the particle divided by its positive charge.  If the charge is +1, this will be the same as the mass, but it won’t be if there is more than one electron removed in the ionizer.  Additionally, there are spectrometers referred to as “time of flight” spectrometers in which the particles aren’t separated by how far apart they are on a graph, but on how long it takes for them to hit the detector.  It works by the same principles, though the implementation is different.

11.  It’s theoretically possible to use really fancy computations to figure out the structure of a liquid or powder, but not realistic in practice.  There is a process called small-angle scattering (SAS) that does this a little better, but again, it’s not usually used to identify unknowns.