One of the most important ways that a chemist can show data to other people is by graphing it.  Not only do graphs give a good view of what the trends in the data are, but they also make a scientific paper look nicer.  After all, who wouldn’t rather read a picture book than one without illustrations?

Unfortunately, many of you (yes, you) don’t know how to draw a good graph.  Or even know what a good graph is supposed to look like.  I blame newspapers for this, because newspapers exist to make news look cool, rather than to actually inform you about anything.  If you think I’m mistaken, look at the main section of any newspaper and see for yourself.

Anyhow, I’m here to tell you about the seven steps that will allow you to make wonderful graphs.  Let’s begin, shall we?

Step 1:  Giving your graph a title

When you title your graph, the only reasonable title looks like this:

If, on the other hand, you were to write a title that read “What happened when I heated the mixture”, that would be a lousy title because it wouldn’t give much information about what happened.

Step 2:  Finding each axis of your graph

The x-axis of your graph (the one on the bottom) should always represent your independent variable.  The y-axis on your graph (the one that goes up and down) should represent your dependent variable.  If you’re not sure which variable is which, either look at what you wrote in step 1, or ask yourself “What did I actually do in this experiment?” (x-axis) and “What did I measure in this experiment?” (y-axis).

For the record, time is always going to be your independent variable and will always reside on the x-axis.  This is because any event will take place as time passes, rather than time passing (or going backwards!) as events take place.

If you don’t label the axis of a graph, nobody will have any idea what you’re talking about.  As a result, it’s important that you label each axis with the name of the variable (time, heat, etc.) and the unit you used to measure the variable (seconds, degrees Celsius, meters, etc.)

Step 4:  Always use a line graph

You’ve probably seen many types of graph in your life.  Bar graphs are common in economics books, pie charts are common in USA Today (for some reason), and picture graphs are just stupid.  And, of course, you’ve seen line graphs before.

In science, we always use line graphs.  This is because graphs are intended to help us to figure out the trends that develop between the independent and dependent variables.  For example, if we have a good line graph that covers how temperature has changed from time = 0 seconds to time = 240 seconds, we can use it to figure out what the temperature should be at any time between these points, even if we didn’t take data there.

In other words, line graphs are good for describing causal relationships, where one thing causes another to happen (like what we’re doing now!)  The other types of graphs are used in these situations: 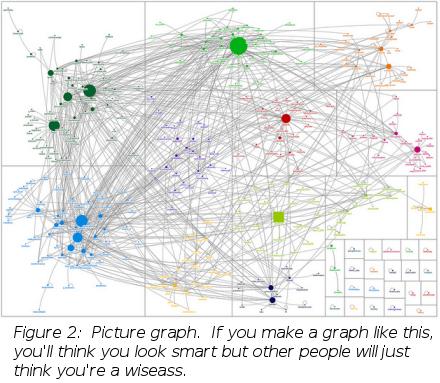 Remember, the idea of a graph is to figure out how two variables are related to one another and to make it possible to predict what will happen at any given point.  If you connect the dots, this won’t be possible. 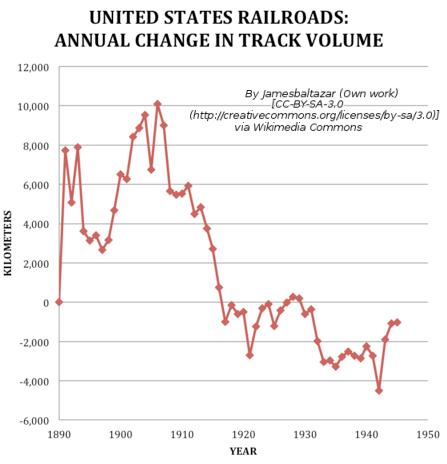 I know this looks like a good graph.  And it is very nice.  However, let me ask you something:  What will the change in track volume be in 1950?  Go ahead… use the graph to figure it out. 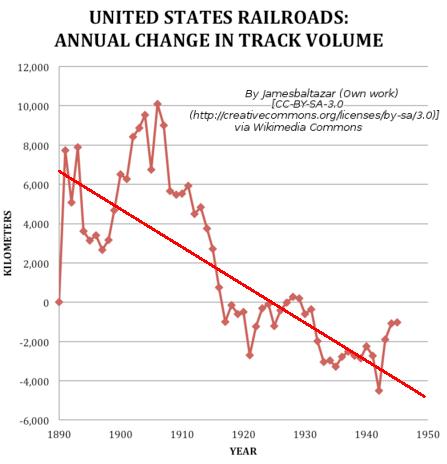 From this graph, we can see that in 1950, the expected change in track volume will be about -4800 km.  Is this exactly what will actually happen?  Probably not.  However, does it give us a good idea about what’s generally happening?  You bet.  It may not be -4800 km, but that seems like a pretty good guess based on the data.

If you make a graph with the goal of showing how something changes over time, it doesn’t do anybody much good if the graph is too small to see.  Let’s figure out what’s happening here (Figure 5): 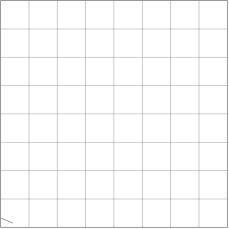 Step 7:  Don’t leave anything out

One of everybody’s favorite tricks is to make a graph look cooler by leaving out the data. To see what I mean, let’s have a look at a graph that shows how much money my wallet has contained this week: 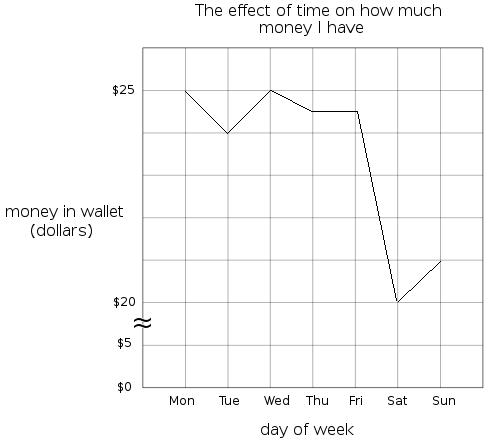 Holy crap!  I was doing OK and then disaster hit on Saturday!

Or not.  In this graph, the combination of connect-the-dots and leaving out the entire range of data between $20 and $5 cause people to get the impression that I’ve lost all of my money.  In reality, I spent $4.50 on a bagel and soda on Saturday morning.  A better graph would look like this: 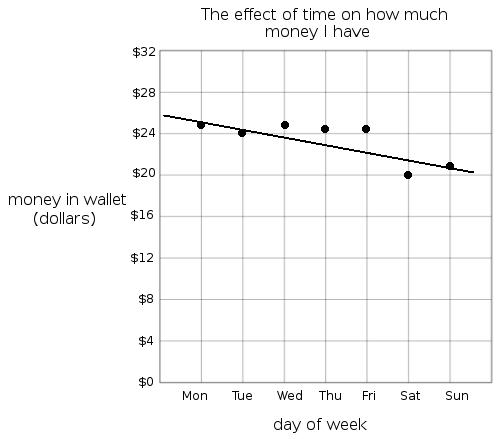 Suddenly, I look a lot less poor.  Which is what reflects reality.

Those little squiggles in the first graph may tell people that the points between $5 and $20 have no value, but they do.  Though there’s no exciting stuff happening there, the gap that the squigglies take out changes the apparent scale of the graph, which makes it harder to understand.  Since we’re trying for comprehensibility, that’s bad.

Tutorial (and other helpful stuff):

This webpage and the related worksheets are licensed under the Creative Commons Attribution-NonCommerical-ShareAlike 4.0 International license (CC BY-NC 4.0).  For more information about this license and how it affects how you can use the contents of this site, click here.  For those of you who need to cite this using incorrect methods such as MLA, APA, and Turabian, it was written by Ian Guch on September 18, 2014.  If you’d like to cite this page correctly using ACS style, click here.

The links in the body of the text and the link to that idiotic graphing video are not covered under this license and the copyright holders should be contacted directly for their terms of use.