Units, units, units.  Every teacher in the world tells you that these things are important, and punishes you mercilessly until you learn them.  They may seem annoying to learn, but… well, I don’t really have a finish to this sentence that will demonstrate that they’re fun to learn.  I’ll be honest:  Units are not fun to learn.  However, they are unbelievably important when doing chemistry (or anything else, for that matter), so you’re going to learn them anyway.

Wiktionary says that a unit is “a standard measure of a quantity.”  This definition is not very handy, so let’s put that in terms normal people will understand.

Units are the things you stick after a number that tell you how big something is, and does it in a way that everybody can understand.  Let’s take a look at what I mean using a fancy bulleted list:

Of course, it’s nice for everybody to agree on the same units before starting a project.  After all, you wouldn’t want a simple mistake involving units to destroy a $327 million dollar spacecraft or anything.

As you’ve probably heard, the units that you’ll need to be concerned with are the International System of units (abbreviated as SI because it comes from the French for “Le Système international d’unités“).  The SI system is basically the most common version of the metric system, so you shouldn’t have much trouble understanding it, particularly if you live in a place that’s not America.

Now, as an aside, let’s ask the big question many of you Americans are thinking right now:  Why do we have to learn a different set of units?  And why does everybody tell us that the units we’re used to (inches, feet, etc.) are bad?

Here’s why people say that Imperial units are worse than SI units:  It’s because these people don’t understand what they’re talking about.  Yep, I said it.  There’s absolutely no reason that you can’t use inches and feet, or degrees Fahrenheit, or pounds to do scientific measurements.

However, and this is a big however, while Imperial units are every bit as marvelous as SI units for taking measurements, they’re also a lot less convenient.  For one thing, it’s pretty simple to convert meters to microns in your head with a little practice, while it’s nearly impossible for anybody to convert 3.48 miles to feet without a calculator.  That’s not to say that it can’t be done, just that it’s way more annoying to do it.  That’s why the whole world (except for America and a few other places) uses the International System:  It’s convenient.

As a result, you need to learn SI units.  And leave the crazy ranting about Imperial units to this guy and this guy.

The two types of units that we use to measure stuff are base units and derived units.  Let’s take a look at them:

Base units are the fundamental units that we use to measure everything.  Most human beings, politicians and lawyers excepted, like to keep things simple whenever possible.  As a result, there are only a few base units upon which every other unit is based.  These include the following:

Other units you may be familiar with from the metric system (centimeters, milligrams, and so forth) are based on these base units through the use of metric prefixes.  We’ll get to that in a minute.

Derived units are units that are based on some combination of the units above.  They’re not the most fundamental units in the world, but they are related to them through some combination or another.  Unfortunately for us, there are about a billion derived units, and I’m definitely not going to go through all of them.  Some examples, however, include the units of density (g/mL), joules (newton meters), and the newton itself (one newton is equal to one kilogram meter per second squared).

Before we can get going with unit conversions, we need to familiarize ourselves with some prefixes that are commonly used when working with the base units.  These prefixes are added on to the front of the units to multiply or divide them by some power of ten.  Let’s take a look at these prefixes and what they mean:

Basically, here’s what I’m trying to say:  The metric prefixes just modify the unit that you’re talking about.  In a very literal sense, if you say that something is “5 kilometers” away, you can take the term apart to find out that the object is “5 thousand meters” away.  After all, “kilo” just means “thousand.”

Now, before I get started, I know that some of you were taught by some teacher in the past to count the decimal places on your fingers when doing metric conversions.  If that works for you, that’s super awesome, but it’s been my experience that it never works for anybody, ever.  You’ll get it right sometimes, but be unhappy with the result other times.  Learn what I’m writing below and you’ll be happy with everything that happens to you in life from now on.  Unit-wise, anyhow.

Let’s learn how to do this by using an example.  (For the record, I know that most of you can do this in your head.  That’s not the point.  I’m using a relatively simple example because it will make it easier for you to figure out what’s going on.)

Let’s look at a handy illustration I made because it’s hard to format things like this in any other way: 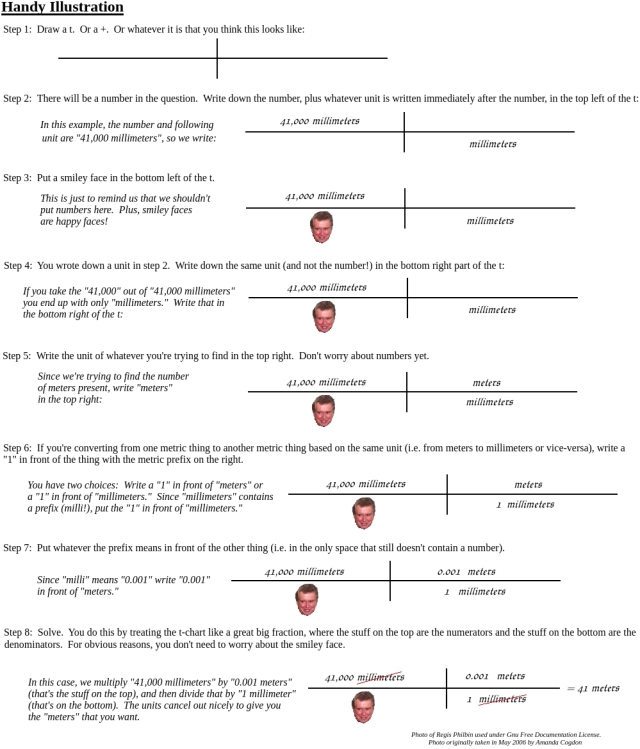 The answer:  They do the same thing twice.  If you’re told to convert from 45 centimeters to kilometers (not that we can imagine this calculation actually being useful for anything), you’d do it in two steps:

But (you might be asking right now), how about conversions between metric and nonmetric units?  What happens if we need to convert between inches and centimeters?

Fortunately, I have an answer for that, too.  An inches to centimeters problem might look something like this:

For no particular reason, convert 45 inches into centimeters.  There are 2.54 centimeters in one inch.

To solve, go through the same steps we saw above.  However, when we get to step 6 (the one where we start putting in numbers), instead of worrying about prefixes and whatnot, just use the unit conversion factor that you were given in the problem.  Which is to say, put “2.54” in front of “centimeters” and “1” in front of “inch.”  Once you’ve plugged these numbers in, go directly to step 8 to solve.

And, for the record, the answer is “110 centimeters.”  If you said “114.3 centimeters”, give yourself a big frowny face for ignoring significant figures.

Tutorial (and other helpful) stuff:

This webpage and the related worksheets are licensed under the Creative Commons Attribution-NonCommerical-ShareAlike 4.0 International license (CC BY-NC 4.0).  For more information about this license and how it affects how you can use the contents of this site, click here.  For those of you who need to cite this using incorrect methods such as MLA, APA, and Turabian, it was written by Ian Guch on September 11, 2014.  If you’d like to cite this page correctly using ACS style, click here.

The links in the body of the text and the link to Mr. Green’s video are not covered under this license and the copyright holders should be contacted directly for their terms of use.